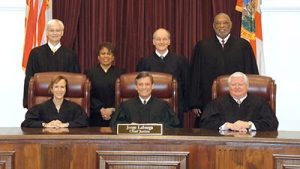 The Florida Supreme Court, due to an internal error, mistakenly issued an order on 1/4/17 in the case of Larry Darnell Perry v. State of Florida, SC16-547. The premature order is on the Court’s website and has been marked “Vacated.”

The order references cases that still are pending in the Court in which separate opinions have not yet been issued. The error occurred because today’s order should not have been released until the opinions in those separate cases actually have been issued.

Appellate courts in the United States routinely process a large number of cases simultaneously. As a result, all appellate courts take steps to ensure that no order or opinion is issued if it cross- references other cases that remain pending. The rule is that courts wait until all of the referenced opinions have been released to the public.

Due to purely human error, that process failed today. The Florida Supreme Court regrets the error and is reexamining its internal procedures to prevent similar errors from occurring in the future.

With one of the few private attorneys in this area who are qualified to try capital punishment crimes as a partner, Mario, Gunde, Peters, Rhoden & Kelley, LLC is ready to handle your serious felony, misdemeanor, or capital crime case.  Call the office for a consultation or use the Contact form at the top of this page